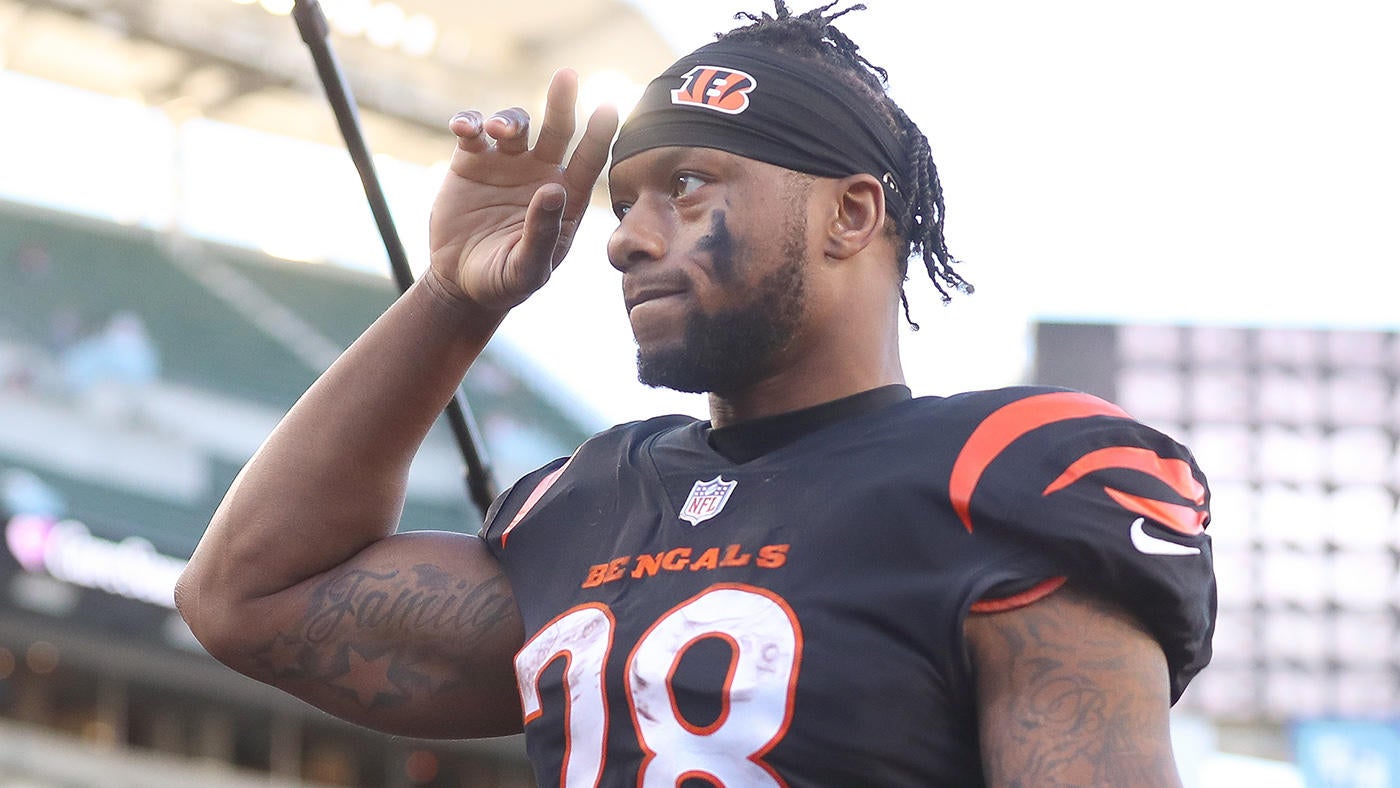 It’s December in the NFL, which means that each game carries more significance as teams fight for playoff positioning. Several games in Week 13 are bound to have a playoff feel, including an AFC Championship rematch between the Bengals and Chiefs and a possible Super Bowl preview between the Dolphins and 49ers.

As always, injuries are a main storyline entering this weekend’s games, particularly in the two alluded to above. The Bengals are hoping that Ja’Marr Chase and Joe Mixon are available for Sunday’s big game, though the latter is looking very unlikely as he remains in concussion protocol. 49ers’ All-Pro wideout Deebo Samuel’s status has also been in question this week as he is dealing with a quadriceps injury, but will play vs. the Dolphins, according to Jeff Darlington.

In other games, Bears quarterback Justin Fields resumed practicing in full this week after missing Chicago’s last game with a shoulder injury. His counterpart on Sunday, Packers quarterback Aaron Rodgers, is dealing with injuries to both his thumb and midsection.

Along with those injuries, here’s a look at each NFL team‘s final injury report ahead of Sunday’s games. We’ll be updating the following lists, so make sure to revisit this page frequently with the latest updates regarding player injuries.

All odds courtesy of Caesars Sportsbook

Watt’s absence would be a major one given the Steelers’ 1-10 record without the reigning Defensive Player of the Year in the lineup. Pittsburgh did receive positive news in that running back Najee Harris was taken off the injury report after leaving Monday night’s win over Indianapolis early after suffering an oblique injury. He’s active for the game against Atlanta.

Atlanta is relatively healthy for Sunday’s home game. Ebiketie and Dalton are trending toward playing after both were limited during Thursday and Friday’s practices. The same can’t be said of Edoga, who did not practice Thursday and Friday after being limited on Wednesday.

Chicago will have Justin Fields back on the field after he was a full participant during the week’s final two practices. Bears fans were hit with somber news earlier this week when safety Eddie Jackson (Lisfranc) and wideout Darnell Mooney (ankle) were placed on injured reserve.

Bears coach Matt Eberflus told reporters on Friday that Trevor Siemian will undergo season-ending surgery on his oblique injury, which he hurt during warmups last week but was still able to play.

Etienne is good to go after being listed as questionable. Jaguars coach Doug Peterson was optimistic his second-year running back was able to play. Peterson is not as optimistic regarding Henderson, stating that he will likely be inactive on Sunday.

This is arguably the best injury report of the year for the Lions, with just two players ruled out. Cornerback Jeff Okudah and guard Jonah Jackson, who were sidelined by recent concussions, were cleared to play for this week. Wide receiver Jameson Williams has been activated from IR.

Carter has been ruled out. James Robinson may be playing behind a revamped offensive line, however, as both of the Jets’ starting tackles are on the injury report. Mike Remmers and Max Mitchell are in line to start if Brown and Ogbuehi can’t play. Remmers is a 10-year veteran with 90 starts under his belt. Mitchell has already logged four starts in his rookie season.

With Darrisaw out, Blake Brandel is slated to make his second start in as many week. A sixth-round pick in the 2020 NFL Draft, Brandel played in each of the Vikings’ offensive snaps during the team’s 33-26 win over the Patriots on Thanksgiving.

Young will have to wait until at least Week 15 to make his season debut as he was ruled inactive Sunday against the Giants. Young was limited all week and the team has a bye coming up. Gibson will suit up after being limited Friday and missing Thursday’s practice.

The Giants have a laundry list of injuries entering Sunday’s big divisional showdown. Receiver is among the positions the Giants have been hit by injuries. Kenny Golladay was ruled out with an illness, but Darius Slayton is good to go.

The Titans will be on Simmons watch for Sunday, as Friday was the first time he practiced all week. He’s been rehabbing his injured ankle, and is listed as questionable for the fifth time in six weeks. Simmons ended up playing the other four times he was questionable. Randy Bullock, who missed the last two games with a calf injury, has been feeling better so the Titans have a roster decision to make with Caleb Shudak this week if Bullock is ready to go.

No surprise Gardner-Johnson is out for the Eagles, but Quinn was a surprise on the injury report with a knee injury. Quinn was healthy all week prior to Friday. The Eagles could also activate Jordan Davis (ankle) from IR this weekend.

The Broncos won’t be as thin at wide receiver Sunday as both Hamler and Jeudy not on the inactive list. Sutton didn’t practice all week with an illness, but is also active vs. Baltimore.

Thin in the secondary, the Ravens won’t have Marcus Williams this week. It remains to be seen if Humphrey plays, but Peters wasn’t given an injury designation. No J.K. Dobbins this week either, as this week was a “ramp-up period” for the running back, according to head coach John Harbaugh.

The calf injury that limited Cooks Thursday kept him out of practice Friday — and out of Sunday’s game. Houston will rely on Nico Collins, Phillip Dorsett and Chris Moore to fill the void. Stingley’s injury is “mild” now, per Texans head coach Lovie Smith.

The Seahawks are pretty healthy heading into this one, even with several players having an illness and missing practice this week. Tackle Abraham Lucas (knee) was not given an injury designation, so he’ll play.

The Rams will not have Donald on Sunday, as he misses the first game in his career due to injury. John Wolford will make the start at quarterback with Stafford out for the second straight game. Rams head coach Sean McVay said Bryce Perkins could play some snaps. Hill is a game-time decision while offensive lineman Ty Nsekhe (ankle) was not given an injury designation.

Left tackle Armstead will reportedly miss Week 13, as will right tackle Austin Jackson, who’s been ruled out. Greg Little would start for Armstead while Brandon Shell would start at right tackle in place of Jackson. Raheem Mostert (knee) was not given an injury designation, so he’ll backup Jeff Wilson at running back.

The 49ers have a laundry list of injuries to star players, but there is some good news in the pile. Running back Christian McCaffrey (knee), defensive lineman Arik Armstead (foot/ankle), and quarterback Jimmy Garoppolo (knee) were not given an injury designation and will play Sunday. Jordan Mason will be the No. 2 running back with Mitchell out. Williams was a late addition to the injury report after leaving practice with a back injury, so the 49ers will have to wait and see for Sunday. Samuel was limited in Friday’s practice as well, but was in a helmet and uniform. He is reportedly good to go, and set to play Miami.

Not having Toney hurts, but the Chiefs have a plethora of other offensive skill players — including Travis Kelce, JuJu Smith-Schuster, Marquez Valdes-Scantling, Skyy Moore and Isiah Pacheco — ready to pick up the slack. A more pressing issue would be the Chiefs’ depth at safety if Bush can’t play. Bryan Cook, a rookie who played college football in Cincinnati, is the Chiefs’ only other backup safety.

Chase is expected to return for the Bengals this week, giving Joe Burrow his top target back in Cincinnati’s biggest game of the year. Mixon has to clear concussion protocol after being a limited participant in practice all week and is reportedly unlikely to play.

Another week Williams will sit with an ankle injury, as the sixth-year receiver has played just six snaps since Week 7. More Josh Palmer and DeAndre Carter will be in play. Will Clapp and Foster Sarell will start on the offensive line with Pipkins and Linsley out.

Jacobs should be a go for the Raiders this week, even though the NFL rushing leader has been limited in practice throughout the week.

Colts interim coach Jeff Saturday has labeled Moore as “week to week.” Tony Brown and Dennis Kelly are slated to replace Moore and Smith in the starting lineup, respectively. A four-year veteran, Brown recorded his first career sack earlier this season. Kelly, an 11-year veteran who played previously in Green Bay, Tennessee and Philadelphia, has 53 career starts under his belt.

The Cowboys battled illness the whole week, as Gallup and Diggs returned to practice Friday in a limited capacity. We’ll see how they feel Sunday, but they should be better by Sunday night. Terrence Steele (personal) has no injury designation, so he’ll play.

Browns’ Deshaun Watson ‘has made progress’ in his treatment program