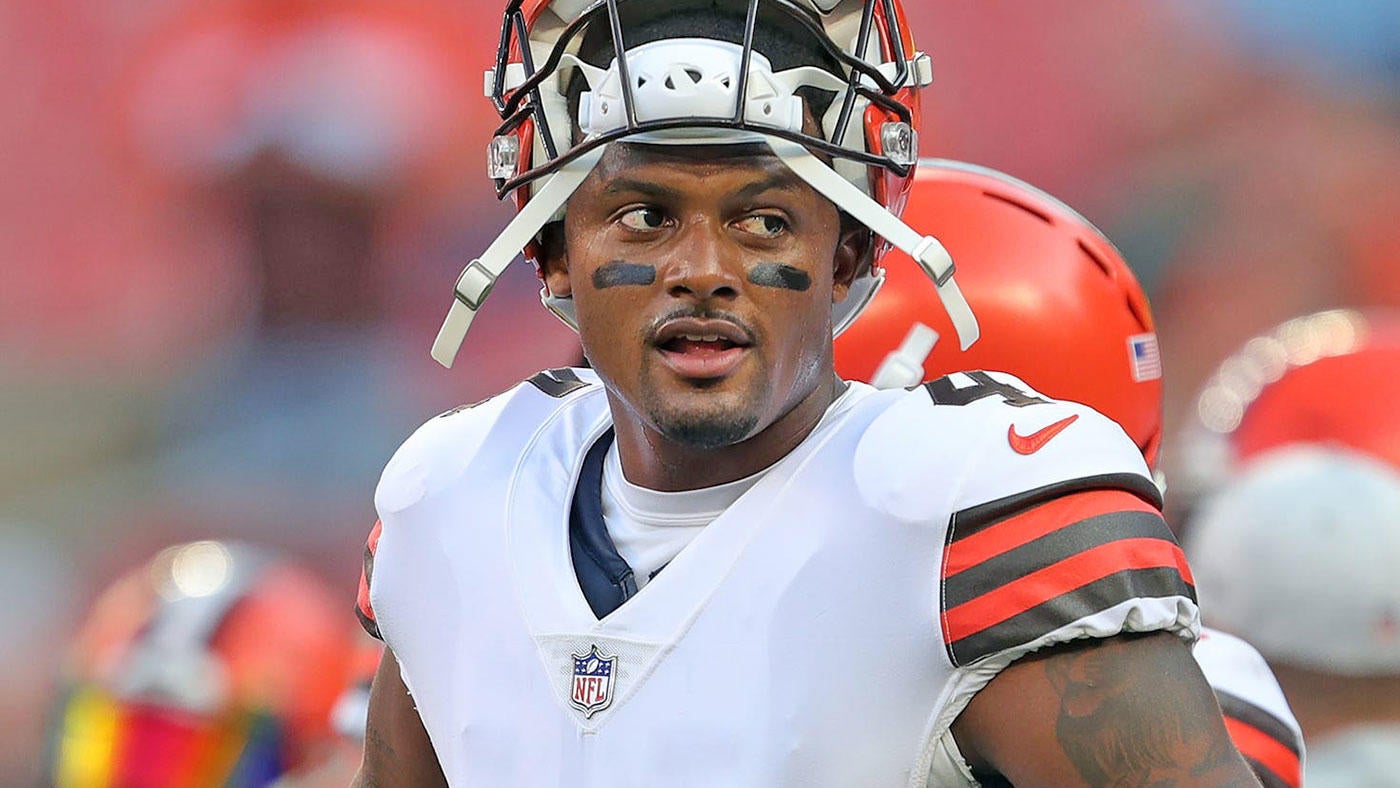 In speaking to reporters on the record Thursday for the first time since before his 11-game suspension began, Cleveland Browns quarterback Deshaun Watson declined to address any non-football-related questions on the advice of his legal team and clinical team.

Indeed, sources tell CBS Sports that Watson had been informed by his behavioral clinical team that he shouldn’t talk about his treatment program and recovery. And while the exact details of his program are privileged medical information, a league source said the NFL and its experts have been told “he has made progress” in the program.

Watson will play in his first game of the season today against the Houston Texans, his former team. In August, Watson, the NFL Players Association and the NFL reached a settlement where he was suspended 11 games, fined $5 million and required to go to treatment.

The NFL pushed for Watson to go to mandatory behavioral treatment as administered by professional clinicians. That differs from therapy, according to a league source, in that it hopes to help people recognize they caused harm with the actions they took and help them change behavior as to not cause harm in the future.

Watson faced numerous allegations of sexual misconduct from massage therapists. In all 26 civil lawsuits were filed against Watson: 23 were settled, one was dropped and two are pending.Watson was never criminally charged by police, and two grand juries declined to indict him earlier this year.

The league, in consultation with the NFL Players Association, spent weeks searching for a professional evaluator who had experience and understood the nuances and complexities of this particular case. That evaluation took place shortly after the settlement was agreed to, and from that the evaluator composed a treatment plan that would be carried out by clinicians in the Cleveland area.

That plan is protected by HIPAA, but a source says that updates in a general sense are and have been provided to the league and union’s medical staff. CBS Sports reported earlier in the season that treatment would continue after the suspension had been lifted, and that remains true, though it’s unclear for how long.

Watson, who signed an unprecedented fully guaranteed contract with the Browns this offseason for $230 million, has spoken publicly less than a half-dozen times since the allegations first emerged.

On Aug. 12, Watson seemed to show some contrition in an interview while not admitting guilt.

“I want to say that I’m truly sorry to all the women I’ve impacted in a situation,” Watson said. “My decisions that I made in my life that put me in this position I would definitely like to have back. I want to continue to move forward and grow and learn and show that I am a true person of character.”

But less than a week later, he appeared to go back on what he said. One source called his Aug. 18 press conference “disappointing” for the league, and it came almost as soon as the settlement terms were announced.

“I’ve always stood on my innocence and always said I never assaulted anyone or disrespected anyone and I’m continuing to stand on that,” Watson said in August.

While there was disappointment within the league office, there was also hope that treatment would help guide Watson. A league source noted that, with two legal cases still pending, Watson may not be able to admit to certain things if he wished to, but that there is space to show accountability, growth and learning.

As he prepares for his return Sunday, the question many have had is: why now? Did the league not understand the Browns would play Watson’s former team in Houston in their 12th game? Or did the league do this for ratings, as many have pondered?

League sources tell me potential ratings had no bearing on the game. The schedule was released three months before the settlement was ever reached. The game would have never gotten flexed into a primetime window, sources say, and the CBS broadcast of the Browns-Texans game will been seen almost exclusively in the Houston and Cleveland areas.

Each of the 11 games in the suspension was a negotiation, sources noted. The league initially sought an indefinite suspension of at least a year while the NFLPA pushed for zero games. Retired judge Sue L. Robinson, jointly appointed by the league and union to be the disciplinary officer, handed down a six-game suspension while calling his “pattern of conduct more egregious than any before reviewed by the NFL.”

The union and Watson agreed to the six-game suspension, but the NFL initiated its right to appeal, and commissioner Roger Goodell appointed former New Jersey attorney general Peter Harvey to hear the appeal. At that point, settlement talks began in earnest between the sides. The middle point between six games and a full year of 17 games is 11 1/2.

In short, the league agreed to 11 games because there were more important pieces to the puzzle. The more time spent haggling over another game or two was less time to get Watson on a treatment plan, I’m told.

The league and union were able to reach an agreement rather than the league imposing its own indefinite suspension of at least a year. A reasonable response from Watson and the union would be a protracted legal battle that would delay treatment. If the point was for lessons to ultimately be learned, agreeing to a deal that got Watson into treatment quickly was viewed as worthwhile.

On Thursday, a reporter asked Watson if he planned to one day address questions unrelated to football and tell his side of things.

“At this time I can’t address any of that stuff,” Watson said. “Who knows what the future holds? Right now I’m so locked in on being the starting quarterback of the Cleveland Browns.”