MYKOLAIV, Ukraine — Ukrainian police officers returned Saturday, along with TV and radio services, to the southern city of Kherson following the withdrawal of Russian troops, part of fast but cautious efforts to make the only regional capital captured by Russia livable after months of occupation. Yet one official still described the city as “a humanitarian catastrophe.”

People across Ukraine awoke from a night of jubilant celebrating after the Kremlin announced its troops had withdrawn to the other side of the Dnieper River from Kherson. The Ukrainian military said it was overseeing “stabilization measures” around the city to make sure it was safe.

The Russian retreat represented a significant setback for the Kremlin some six weeks after Russian President Vladimir Putin annexed the Kherson region and three others provinces in southern and eastern Ukraine in breach of international law and declared them Russian territory.

The National Police chief of Ukraine, Ihor Klymenko, said Saturday on Facebook that about 200 officers were at work in the city, setting up checkpoints and documenting evidence of possible war crimes. Police teams also were working to identify and neutralize unexploded ordnance and one sapper was wounded Saturday while demining an administrative building, Klymenko said.

Ukraine’s communications watchdog said national TV and radio broadcasts had resumed in the city, and an adviser to Kherson’s mayor said humanitarian aid and supplies had begun to arrive from the neighboring Mykolaiv region.

But the adviser, Roman Holovnya, described the situation in Kherson as “a humanitarian catastrophe.” He said the remaining residents lacked water, medicine and food — and key basics like bread went unbaked because a lack of electricity.

“The occupiers and collaborators did everything possible so that those people who remained in the city suffered as much as possible over those days, weeks, months of waiting” for Ukraine’s forces to arrive, Holovnya said. “Water supplies are practically nonexistent.”

The chairman of Khersonoblenergo, the region’s prewar power provider, said electricity was being returned “to every settlement in the Kherson region immediately after the liberation,”

Despite the efforts to restore normal civilian life, Russian forces remain close by. The General Staff of Ukraine’s armed forces said Saturday that the Russians were fortifying their battle lines on the river’s eastern bank after abandoning the capital. About 70% of the Kherson region remains under Russian control.

Ukrainian officials from President Volodymyr Zelenskyy on down chave autioned that while special military units had reached the city of Kherson, a full deployment to reinforce the advance troops still was underway. Ukraine’s intelligence agency thought some Russian soldiers may have stayed behind, ditching their uniforms for civilian clothes to avoid detection.

“Even when the city is not yet completely cleansed of the enemy’s presence, the people of Kherson themselves are already removing Russian symbols and any traces of the occupiers’ stay in Kherson from the streets and buildings,” Zelenskyy said in his nightly video address.

Zelenskyy said the first part of the stabilization work includes de-mining operations. He said the entry of “our defenders” — the soldiers — into Kherson would be followed by police, sappers, rescuers and energy workers, among others.

Moscow’s announcement that Russian forces were withdrawing across the Dnieper River, which divides both the Kherson region and Ukraine, followed a stepped-up Ukrainian counteroffensive in the country’s south.

In the last two months, Ukraine’s military claimed to have reclaimed dozens of towns and villages north of the city of Kherson, and the millitary said that’s where stabilization activities were taking place.

Russian state news agency Tass quoted an official in Kherson’s Kremlin-appointed administration on Saturday as saying that Henichesk, a city on the Azov Sea 200 kilometers southeast of Kherson, would serve as the region’s “temporary capital.”

Ukrainian media derided the announcement, with the Ukrainska Pravda newspaper saying Russia “had made up a new capital” for the region.

Across much of Ukraine, moments of jubilation marked the exit of Russian forces, since a retreat from Kherson and other areas on the Dnieper’s west bank would appear to shatter Russian hopes to press an offensive west to Mykolaiv and Odesa to cut off Ukraine’s access to the Black Sea.

In Odesa, the Black Sea port, residents draped themselves in Ukraine’s blue-and-yellow flags, shared Champagne and held up flag-colored cards with the word “Kherson” on them.

But like Zelenskyy, Ukrainian Foreign Minister Dmytro Kuleba sought to temper the excitement.

“We are winning battles on the ground, but the war continues,” he said from Cambodia, where he was attending a meeting of the Association of Southeast Asian Nations.

Kuleba brought up the prospect of the Ukrainian army finding evidence of possible Russian war crimes in Kherson, just as it did after previous Russian pullbacks in the Kyiv and Kharkiv regions.

“Every time we liberate a piece of our territory, when we enter a city liberated from Russian army, we find torture rooms and mass graves with civilians tortured and murdered by Russian army in the course of the occupation,” Ukraine’s top diplomat said. “It’s not easy to speak with people like this. But I said that every war ends with diplomacy and Russia has to approach talks in good faith.”

Donetsk Gov. Pavlo Kyrylenko reported Saturday that two civilians were killed and four wounded over the last day as battles heated up around Bakhmut and Avdiivka, a small city that has remained in Ukrainian hands.

Russia’s continued push for Bakhmut demonstrates the Kremlin’s desire for visible gains following weeks of setbacks. It would also pave the way for a possible push onto other Ukrainian strongholds in the heavily contested Donetsk region.

Follow AP’s coverage of the war in Ukraine: https://apnews.com/hub/russia-ukraine 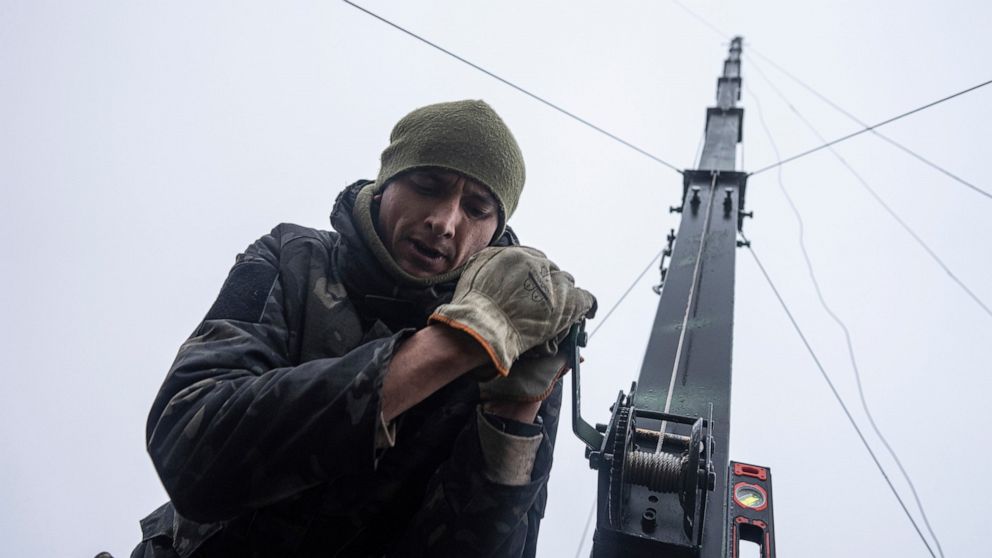